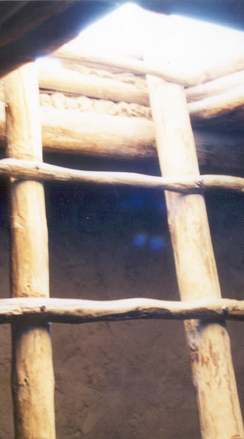 In the course of addiction, the physical body becomes warped around the intoxicant; until there is no longer choice or even the idea of dignity or morality. Distanced even from original source wounds, addiction eventually becomes the largest wound of all.

Grace heals the body, mind and nervous system, literally bent over by the damage caused by addiction.

Prayer disarms and repulses the Devil, who whispers the insidious empty promise of enslaving attachment to poisons that destroy. Satan seeks to murder every human being on earth, addiction is his cruelest method. The need of a Savior becomes obvious in view of the reality of the evil one, the Angel of Death which human will and strength do not overcome.

Twelve step programs attest, there is first the admission of personal incapability to fix what is broken, and closely with it, belief (choosing to believe) that there is a Supreme Beneficence, a Power that can and will restore sanity if it is desired and asked for (prayer).

The anonymous 12-step group can help. No addict recovers without coming into community. The 12-step family allows each addict to frame his own recovery in the particulars of personal faith or religion. It is open like this to help any sufferer come out of dark isolation into the light of those familiar with the affliction, no matter how little spiritual formation they may bring.

Yet, one's recovery is also limited by one's understanding of God. Put another way, one can only recover to the degree one has allowed "Higher Power" to possess and be capable of exacting the remedy.

The 12-step room is a place where lack of control is confronted, where begins a clear understanding that an addict cannot will himself to be free. It is secondly, the first bold attempt to find the wound underneath the compulsion to medicate with an intoxicant.

Tremendous clarity is gained in understanding the problem (lust), the battle and how an addict life is created in the first place. Bringing all these hidden things into the light begins to immediately destroy the reservoirs of fear and helplessness upon which sinful habit has long drawn.

The 12-step program is a good place to begin the departure from the broken past. Sexaholics Anonymous brings the possibility of survival, of not dying in a gutter.  Ultimately, all support groups become part of the recovery journey.

Though any addict may be capable of making a thorough and fearless 'inventory' of one's life and errors, despite even a superbly organized biography of injury and faults, freedom can still elude us.

All addictions have a hidden demonic dimension, a spirit of destruction that has lodged itself through an entryway of pain, fear or traumatic wound. No human hand (doctor, psychiatrist, therapist or clinician) or human technique of any kind can eradicate this dark influence and power. We need a Godly power who is stronger than the supernatural, invisible adversary.

The source of all higher power, of grace, is God. Jesus Christ is the visible incarnation of God, saver of the afflicted and despairing of earth > sinners and addicts.

All religion seeks reconnection to The Divine (re ligio).

Christianity is not a competitor to other faiths, its central truth is not proclaimed by other religions.   Jesus is God walking among his own creatures on earth as a man.

The Son of God closes the aeon of 'distant' religion. God is not 'far away', but now here, near 'at hand': Christ is 'Emmanuel', God with us.

God comes amongst His very own creatures, becoming like them, to show them the way and to pay with His own divine life the sole sufficient ransom that procures freedom for all human creatures from all evils of earth. God alone restores what man damages by the misuse of free will.  These words may be familiar but they posit a vast reality impossible to process just by reading one sentence.

This website announces the personally witnessed efficacy of the One Church, the One Faith, that alone completes the freedom sought, through the Blood of the spotless sacrifice, Jesus Christ.

"The enlightenment you seek has been present in Christianity from the beginning."